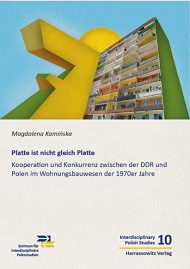 This study examines the cooperation between two former socialist sister states, the German Democratic Republic (GDR or East Germany) and the Polish People's Republic, in the field of industrialised housing construction in the 1970s. Using the East German housing series WBS 70 and the Polish W-70 (“Warszawa 1970”) as examples, both successful and unsuccessful aspects of this partnership are highlighted. Structures, contacts as well as the scope for action are analysed from the institutional to the individual level. Did both sides influence each other? What role did Western societies play? These and other key questions are answered in a way that avoids stereotypical notions of hierarchical decision-making processes in socialist states. This balanced analysis rather tells the story of the pan-European transfer of ideas and knowledge in post-war modernism.