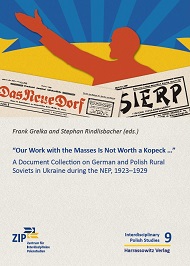 „Our Work with the Masses Is Not Worth a Kopeck“. A Document Collection on German and Polish Rural Soviets in Ukraine during the NEP, 1923–1929, Wiesbaden 2021

The era of the New Economic Policy (NEP) was the golden age of Soviet affirmative national policies. This volume of documents offers insights into Polish and German minority institutions and political practices in early Soviet Ukraine. It provides a picture of how people in rural areas received the affirmative initiatives from above and adapted them for their own purposes. Even though these policies failed to achieve the goals the Bolsheviks expected, they granted a large degree of autonomy on a local scale that was unmatched in previous and later times. The Polish village of Hreczany near Proskuriv (today Khmel’nyts’kyi) in western Ukraine, and the German Karl-Liebknecht Raion in southern Ukraine serve as prime examples in this document collection.